Mound of the Dead Men

Mohenjo-daro (Sindhi: موئن جو دڙو‎) is an archaeological site in the province of Sindh, Pakistan. Built around 2500 BCE, it was one of the largest settlements of the ancient Indus Valley Civilisation, and one of the world's earliest major cities, contemporaneous with the civilizations of ancient Egypt, Mesopotamia, Minoan Crete, and Norte Chico. Mohenjo-daro was abandoned in the 19th century BCE as the Indus Valley Civilization declined, and the site was not rediscovered until the 1920s. Significant excavation has since been conducted at the site of the city, which was designated a UNESCO World Heritage Site in 1980.[4] The site is currently threatened by erosion and improper restoration.

The excavation of Mohenjo Daro and Harappa started in the late 1820s, when Charles Masson, a British explorer in India, found the ruins of a lost city. These were the very first evidence of Harappan civilization that existed in this region thousands of years ago.

Almost a century later, excavation work for the discovery of Mohenjo Daro also began. Both of these archaeological sites prove that the north-western region of South Asia, which is now Pakistan, remained a home of Indus Valley Civilization from 3,300 BC to 1,900 BC.

Archaeologists believe that these ruins could unlock some of the most incredible secrets of the Indus Valley Civilization. Efforts are being made to save the ancient heritage of the Indus Basin from diminishing.

The UNESCO World Heritage site of Mohenjo Daro is found in the province of Sindh, a 37-minute drive from Larkana. It is one of the most famous historical places in Sindh. Moen Jo Daro means ‘Mound of The Dead Men’ in Sindhi, which is a language spoken locally.

Mohenjo Daro was an advanced city as its ruins show signs of remarkable civil engineering and urban planning tactics. Apart from this settlement, Harappa, Lothal, Kalibangan, Rakhigarhi and Dholavira were the urban centres of the Indus Valley Civilization, extended to the Iranian Border.

Rediscovery
For over 3,700 years, the archaeological gem of Mohenjo Daro remained undocumented. However, after some impediment findings, large-scale excavations to unearth the site of Mohenjo Daro began in the 1920s. It was led by John Marshall, who was the Director General of Archeological Survey of India at that time.

In 1965, the excavation work at the site of Mohenjo Daro came to a halt as the place was showing the signs of weather damage. In 1980, further probing of the area was done by Italian and German survey groups to dig deeper into the secrets of Mohenjo Daro.

Only four years ago, in 2015, dry core drilling was conducted by Pakistan’s National Funds at this site, the findings of which surprised everyone. A large part of the historical site has still not been unearthed.

Mohenjo Daro had a carefully planned infrastructure. According to an estimation mentioned in Oxford Handbook of Cities in World History, the city had a population of around 40,000 people.

The ruins of this city hint towards a commendable level of social organization. Mohenjo Daro is known to have large public baths, assembly halls, houses with inner courtyards and also some multiple stories constructions.

The excavation work done till date in Mohenjo Daro has unearthed over 700 water wells in this city of ancient times. These findings are an evident proof of the effectiveness of the water supply system that existed in Mohenjo Daro.

Travelling To Mohenjo Daro
If you are planning to travel to the historical site of Mohenjo Daro by air from Karachi, then it will take you around an hour to get there. Mohenjo Daro airport lacks advance infrastructure, which means only smaller aircraft could land here. The cost of a one-way ticket to/from Mohenjo Daro is around PKR 6,000.

With the help of Khushal Khan Khattak express, you can get to Dokri, which is the only nearest railway station to Mohenjo Daro. The train leaves Karachi at around 9 pm every night and it will take you 9 hours to get there. The ticket fare for a non-air-conditioned seat in a train from Karachi to Mohenjo Daro is PKR 400, which goes up to PKR 1000 for an air-conditioned seat.

Many locals and tourists travel from the city of Larkana to Mohenjo Daro with the help of rickshaws and taxis. Hiring a taxi to travel the distance between Larkana and Mohenjo Daro can cost you around PKR 500-1000. Rickshaw seems to be a more affordable option that can be hired only for around PKR 200. 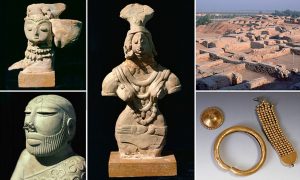 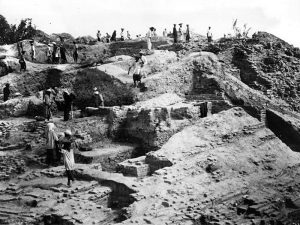