The City of Peace and Justice

This palace in Malerkotla, a small town in Punjab’s Sangrur district, represents the grace of goodness in the face of brutal force. In 1705, the Nawab of Maler Kotla, Sher Mohammad Khan, was the only man to stand up against Wazir Khan, the Mughal Governor of Sirhind who had ordered that the two young sons of Guru Gobind Singh be bricked alive in a wall.

The boys were barely seven and nine, and Mohammad Khan had stood up for them, taking on Wazir Khan in public and then putting himself in the line of fire, by walking out of the royal court in protest. Though the boys couldn’t be saved, Guru Gobind Singh was so grateful that he gave the Nawab a kirpan (a small, symbolic sword worn as an article of faith by Sikhs). Since then, Malerkotla has been immortalised in Sikh history. In fact, the main gate at the gurdwara built to mark the place where the Guru’s sons lost their lives is named after Sher Mohammad Khan, and built on land he gave the Sikhs.

Even during the horrors of Partition in 1947, when Punjab was in the throes of a communal bloodbath, Malerkotla did not witness a single incident of violence. Most of the town’s Muslim population decided to stay in India instead of migrating to Pakistan.

In fact, there is a local legend that, during times of communal tension, the sounds of galloping horses (of the Guru) can be heard around Malerkotla. It is believed that the town is still under the Guru’s protection.

Sadly, never mind celebrating this great legacy, few know of this story outside Punjab. What’s worse, the legacy of Malerkotla is gradually withering away. The palace is in ruins and the 97-year-old Begum, the wife of the last of the Nawabs of Malerkotla, is living in penury. Barely able to survive, in her eyes, you can see echoes of a bygone era contrasted with the despondency of the present.

At a time when we need, more than ever before, to remember what makes us what we are, the story of Malerkotla and its tryst with history should be celebrated. But, first, it needs to be saved, as we found out.

On The Road To Malerkotla

Once the capital of one of Punjab’s grand princely states, Malerkotla today is a picture of squalor and filth. It is a stark picture, even by Indian standards. We drove there to meet the last living member of Malerkotla’s royal family – the 97-year-old Begum Munawaar-un-Nissa, widow of Malerkotla’s last Nawab. What we found was exceptionally sad and tragic.

It was through the Maharaja of Kapurthala’s Chief Advisor, Cynthia Meera Frederick, that we were able to fix an appointment with the Begum. Leaving Patiala for Malerkotla on a foggy winter morning, we did not know what to expect there. Unlike Punjab’s more famous princely states like Patiala, Kapurthala and Faridkot, the history of Malerkotla is scarcely known beyond Punjab. But it is significant. This is the only Muslim-majority town in Punjab and it has always been known for its communal harmony.

In a typical scene that replays along every town across India, we knew we were approaching Malerkotla when the lush green fields gave way to heaps of garbage and plastic. Entering the town, we had some time to kill before we could meet the Begum and so we decided to visit the fort or the ‘kotla’, after which the town is named. It was only after crisscrossing narrow lanes and open sewers that we arrived at a place marked on satellite maps as the ‘Qila’.
The story of Malerkotla’s founding is very similar to the numerous Sufi legends across North India. Locals believe that some time in 1450 CE, an Afghan adventurer named Bahlol Lodi (r. 1451-1517 CE) was on a military expedition to capture Delhi from the Sayyid dynasty, which had ruled it since the end of the Tughlaq rule. On his way there, he and his army were caught in a massive sandstorm. In the darkness that ensued, Bahlol Lodi saw the dim light of a lamp in a hut, still burning despite the strong wind.

He took refuge in the hut, where he met an old Sufi saint, Sheikh Sadruddin-i-Jahan. The Sheikh blessed Lodi, saying he would be victorious, and this indeed came true. Bahlol Lodi defeated the Sayyids and established the Lodi dynasty that would rule Delhi till the advent of Mughal conqueror Babur in 1526.

In 1454, a grateful Bahlol Lodi granted the jagir of ‘Maler’ to Sheikh Sadruddin-i-Jahan and his descendants, which they ruled up until India’s independence in 1947. Around 1657, the then Nawab Bayazid Khan is said to have saved the life of Mughal emperor Aurangzeb, who in turn granted him the privilege of raising a fort or a ‘kotla’ there. That is how the town came to be called ‘Maler-Kotla’. It was the remains of this very kotla, surrounded by wild shrubs, dung and plastic that I was looking at in disbelief.

The fort, made of Nanakshahi bricks (decorative bricks typically used in Mughal times), was ramshackle, to say the least. There were only slivers of plaster to remind visitors of what it must have looked like during its glory days. The main gate has partially collapsed and it seemed too precarious to even pass through.

As we made our way to Mubarak Manzil palace, the Begum’s residence, we drove through some more narrow lanes and what seemed like someone’s front yard. Finally, we arrived at a spectacular Italianate palace with practically no compound. Someone had built an ugly house right in front of the palace.

Inside, we waited in the sitting room for the Begum to arrive. Our coordinator had briefed us on the sad state of the Begum, how she had been cheated by all and sundry, and how even the sofa set that we were seated on had been donated by Navjot Singh Sindhu, Member of Parliament, as a mark of his respect for the Begum. There was little else in the room.
And then she appeared. Clad in a simple salwar kameez, the 97-year-old Begum was helped into the room by her caretaker. A princess from Tonk (in Rajasthan) and wife of Malerkotla’s last Nawab, she wore a regal air despite her reduced circumstances. In spite of the difficulty in hearing, she managed to speak with us briefly about bygone days, the time when ‘Sarkar’ (the Nawab) was alive, and a time when the courtyard outside was alive with elephants and horses. Not wanting to stress her any more, we presented her with a box of sweets and bid her goodbye.

Taken aback at how the Begum had been reduced to near penury, we made a few enquiries. Sifting through old newspaper and magazine reports, we found that after the Nawab’s death in the 1980s, the palace had been systematically stripped of anything of value by a series of unscrupulous managers. Following that, the land around the palace was sold, plot by plot, with little or no money going to the Begum. All that remains is the empty shell of the palace and the lone Begum who lives in it.

Just next to the palace stands a gurdwara, on land donated by the Nawabs. It is a reminder of the royal family’s special connection with the Sikh Gurus. Named ‘Ha Da Nara’ (‘Voice of Justice’) Gurdwara, it commemorates Nawab Sher Mohammad Khan’s decision to walk out in protest against Wazir Khan’s decision to sentence Guru Gobind Singh’s young sons to death in 1705, an incident famous in Sikh history as ‘Ha Da Nara’.

The actual place where the two boys had been bricked alive is 65 km away, just outside the town of Sirhind, where Gurdwara Fatehgarh Sahib stands today. The main gate of this gurdwara has been named after Nawab Sher Mohammad Khan. Gurdwara Fatehgarh Sahib is one of the most important gurdwaras in Sikhism. In view of the exalted status of the Malerkotla royal family in Sikh history, there is now some talk of the Sikh Gurdwara Prabandhak Committee (SGPC) supporting the Begum.

Lastly, we decided to visit the place where it all began – the dargah of Sheikh Sadruddin-i-Jahan. Located right in the centre of the old town, the dargah is an interesting example of Sultanate architecture. Sadly, the beauty of the structure is ruined by an unsightly tin shed that has been added on top, a feature very popular with most of India’s religious structures.

As we left Malerkotla, passing what looked like a pond turned into a plastic dump, I couldn’t help but think of the Begum – how deeply sad it was that she was practically penniless; why she isn’t being cared for?; what will happen to the legacy of Malerkotla after she passes on?; will the story of Malerkotla, its old Nawabs and its link to the Sikhs fade away?; isn’t it really sad that so few know of this little place deep in the interiors of Punjab?

Yet, in a fashionable art gallery in Delhi hangs a valuable painting of the Begum’s grandfather-in-law, which once adorned her drawing room. While the painting is worth crores of rupees, the Begum herself has next to nothing. Her home is falling apart, the roof of her drawing room has collapsed, she lives in a corner room in the ruins of her own palace, and all she has for company are some old photos.

Begum Munawaar-un-Nissa is the last of Malerkotla’s royals, a family that presided over a town whose spirit has so much to teach us today. The least we can do is raise our voice and hope that the Government of Punjab extends its support to the Begum, to give her the comfort she needs and to protect her family’s legacy. 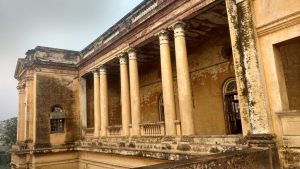 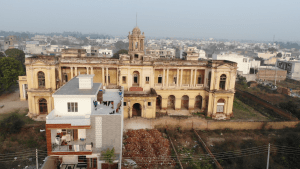 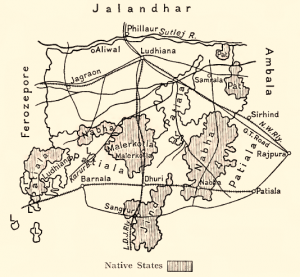