Harappa is an important archaeological site about 200 km south of Lahore. Harrappa is the foremost discovered site of Indus valley Civilization that flourished during 3500 BC to 1500 BC. The site shows traces of a well settled community living systematically with hygienic standards at that time. The site takes its name from a modern village located near the former course of the Ravi River. The current village of Harappa is 6 km from the ancient site.

The ancient city of Harappa was incidentally discovered during British rule in early 19th century during the construction of Lahore-Multan Railway. At site entrance, Harrappa Museum displays interesting excavated objects from the site.

Harappa is the name of the ruins of an immense capital city of the Indus Civilization, and one of the best-known sites in Pakistan, located on the bank of the Ravi River in central Punjab Province. At the height of the Indus civilization, between 2600–1900 BCE, Harappa was one of a handful of central places for thousands of cities and towns covering a million square kilometers (about 385,000 square miles) of territory in South Asia. Other central places include Mohenjo-daro, Rakhigarhi, and Dholavira, all with areas over 100 hectares (250 acres) in their heyday.

Harappa was occupied between about 3800 and 1500 BCE: and, in fact, still is: the modern city of Harappa is built atop some of its ruins. At its height, it covered an area of at least 250 acres (100 hectares) and may have been about twice that, given that much of the site has been buried by the alluvial floods of the Ravi river. Intact structural remains include those of a citadel/fortress, a massive monumental building once called the granary, and at least three cemeteries. Many of the adobe bricks were robbed in antiquity from the significant architectural remains.

The earliest Indus phase occupation at Harappa is called the Ravi aspect, when people first lived at least as early as 3800 BCE. At its beginnings, Harappa was a small settlement with a collection of workshops, where craft specialists made agate beads. Some evidence suggests that people from older Ravi phase sites in the adjacent hills were the migrants who first settled Harappa.

Kot Diji Phase
During the Kot Diji phase (2800–2500 BC), the Harappans used standardized sun-baked adobe bricks to build city walls and domestic architecture. The settlement was laid out along gridded streets tracing the cardinal directions and wheeled carts pulled by bulls for transporting heavy commodities into Harappa. There are organized cemeteries and some of the burials are richer than others, indicating the first evidence for social, economic, and political ranking.

Also during the Kot Diji phase is the first evidence for writing in the region, consisting of a piece of pottery with a possible early Indus script. Commerce is also in evidence: a cubical limestone weight that conforms to the later Harappan weight system. Square stamp seals were used to mark clay seals on bundles of goods. These technologies likely reflect some sort of trade interactions with Mesopotamia. Long carnelian beads found at the Mesopotamian capital city of Ur were made either by craftsmen in the Indus region or by others living in Mesopotamia using Indus raw materials and technology.

Mature Harappan Phase
During the Mature Harappan phase (also known as the Integration Era) [2600–1900 BCE], Harappa may have directly controlled the communities surrounding their city walls. Unlike in Mesopotamia, there is no evidence for hereditary monarchies; instead, the city was ruled by influential elites, who were likely merchants, landowners, and religious leaders.

Also during the Harappa phase, a faience and steatite bead production workshop blossomed, identified by several layers of faience slag—leftover material from the production of the glassy ceramic known as faience—chert blades, lumps of sawn steatite, bone tools, terracotta cakes and large masses of vitrified faience slag. Also discovered in the workshop were an abundant number of broken and complete tablets and beads, many with incised scripts.

Late Harappan
During the Localization period, all of the major cities including Harappa began to lose their power. This was likely a result of shifting river patterns that made the abandonment of many cities necessary. People migrated out of the cities on the river banks and up into smaller cities the higher reaches of the Indus, Gujarat and Ganga-Yamuna valleys.

In addition to large-scale de-urbanization, the Late Harappan period was also characterized by a shift to drought-resistant small-grained millets and an increase in interpersonal violence. The reasons for these changes may be attributed to climate change: there was a decline in the predictability of the seasonal monsoon during this period. Earlier scholars have suggested catastrophic flood or disease, trade decline, and a now-discredited "Aryan invasion."

Trade for raw materials began as early as the Ravi phase, including marine resources, wood, stone, and metal from the coastal regions, as well as neighboring regions in Afghanistan, Baluchistan and the Himalayas. Trade networks and migration of people into and out of Harappa were established by then as well, but the city truly became cosmopolitan during the Integration era.

Unlike Mesopotamia's royal burials there are no huge monuments or obvious rulers in any of the burials, although there is some evidence for some differential elite access to luxury goods. Some of the skeletons also show injuries, suggesting that interpersonal violence was a fact of life for some of the city's residents, but not all. Part of the population had less access to elite goods and a higher risk of violence.

Archaeology at Harappa
Harappa was discovered in 1826 and first excavated in 1920 and 1921 by the Archaeological Survey of India, led by Rai Bahadur Daya Ram Sahni, as described later by M.S. Vats. Over 25 field seasons have occurred since the first excavations. Other archaeologists associated with Harappa include Mortimer Wheeler, George Dales, Richard Meadow, and J. Mark Kenoyer.

An excellent source for information about Harappa (with lots of photographs) comes from the highly recommended at Harappa.com. 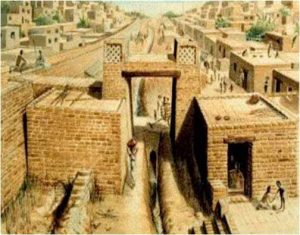 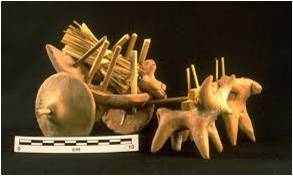 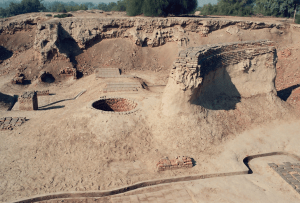