Around 1700 AD ancestral village Ratan area used to be more like a jungle full of wild bores and bushes and naturally grown trees. In 1705, Sri Guru Gobind Singh Ji with a few Sikhs arrived here after travelling from Chamkaur, Machhiwara, Alamgir and Dulay. From Dulay Guru Gobind Singh travelled to Dolon Kalan nearby, then Jodhan and Rattan villages for onwards journey to  Raikot. When the wives of the 2 Sardars Jattu and Swai heard what happened, they travelled to Rattan with parshad and a dushalla to seek forgiveness from Guru Sahib. Guru Gobind Singh gave his blessings and forgiveness. Since Guru Hargobind Sahib had visited Gujjarwal earlier Grewals in this area had become Sikhs of the Gurus. As he was about to leave, the villagers of these villagers requested the Guru to stay for the night. Guru Gobjnd Singh ji agreed for that. Early morning he brushed his teeth with the twig of Tahli tree and planted it into the ground. The dried remains of the tree are preserved at the rear of the Gurdwara in a separate small building. Praising the hospitality, Guru ji showered many blessings including the multiple growth of the area and drove further on his horse towards Raikot. The place where Guruji had rested was later known as Guru di Jhidi. It was said that cutting even a branch from the tree in Guru di Jhidi was considered as offence. As per a legend, at one time some villagers had  cut a tree. When they were taking the branches they became blind and returned to the jhiri back they prayed for saving them from the curse and they then got their eyesight back. Thereafter, no one ever cut the twigs from the Jhidi. According to another legend the pond water had become sacred and its water became curative. A Gurdwara was constructed to commemorate Guru Gobind Singh's visit to the place and was named as Gurdwara Tahli Sahib.  Initially the control of the place was with some Sadhus. One Jullee Sadh obstructed the construction of the Gurdwara. When it came under the control of Shiromani Gurdwara Parbandhak Committee, Bhai Gurdial Singh did a great service towards construction of the Gurdwara and later a Khalsa High school was also constructed. Gurdwara Sri Tahli Sahib Rattan has a Sarovar attached. This Gurdwara is situated just adjoining the village of Rattan. Sangat started coming in large numbers to the place. The crows and vultures come here on specific day and stay till after noon. I used to watch them as I used to pass by since this Pond was near our land. Grewals are the major land holders in the village. 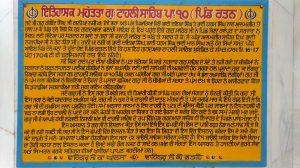