Amritsar, literally a Pool of Nectar, derives its name from Amrit Sarovar, the holy tank that surrounds the fabulous Golden Temple. First time visitors to Amritsar could be forgiven for the impression that Amritsar is like any other small town in northern India. But Amritsar stands head and shoulders above any other city, its status elevated and sanctified by the presence of the venerable Golden Temple.

Located in the heart of Amritsar, the temple complex is surrounded by a maze of narrow lanes, or katras, that house one of the busiest markets in India. But the Golden Temple is a serene presence, radiating a calm that makes people bow their heads in reverence. The gurudwara, as Sikh temples are called, is the holiest of Sikh shrines. It is not just Sikhs who travel to the Golden Temple to pay homage, the sacred shrine is equally revered by Hindus and people of other faiths who, too, make the pilgrimage to offer prayers at Harmandir Sahib.

There more to Amritsar than that - Amongst other sights is Jallianwala Bagh, site of the gruesome massacre of unarmed Indians by British troops. A major tourist attraction these days is the Indo-Pakistan border crossing at Wagah, just a short distance from Amritsar, with its elaborate change-of-guards drill with a lot of strutting and intimidatory showing off by both sides.

If you are 'doing' north India, Amritsar is a city you should not miss. It's easy to travel there from Delhi by road and by rail. It is easy to navigate through the city; few guides bother you as tourism is not the most important commercial activity here. Ask them in Amritsar, and they will tell you that if for nothing else you must travel here for the roadside chhola-bhaturas. 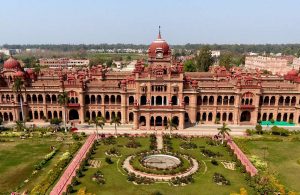 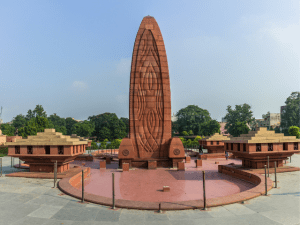