From the beginning of the 7th century Rajput kingdoms dominated the eastern divisions of Pakistan and northern India. In 997 CE, Sultan Mahmud Ghaznavi, took over the dynasty established by his father, Sultan Sebuktegin, In 1005 he conquered the Shahis inKabul in 1005, and followed it by the conquests of some western Punjab region. Eastern regions of Punjab from Multan to Rawalpindi (including region of present-day Faisalabad) remained under Rajput rule until 1193. It was then brought under the control of the Delhi Sultanate and then the Mughal Empire. Faisalabad slowly developed and many Muslim Sufi missionaries converted the local population toIslam.

During the reign of the Mughal Empire the population and cultivation of the land increased. After the decline of the Mughal Empire, the Sikh Empire invaded and occupied the region from 1765 to 1846. The Muslims faced restrictions during Sikh rule and there are countless reports that Muslim community suffered during these times. Faisalabad was also the site of where two major battles took place between the British Empire and the Sikh armies. On the 22 February 1849 the British declare victory in Punjab and Faisalabad came into the control of the British Empire.

In the 1870s the colonial Punjab government decided to increase the cultivated land by making barrages and canals to meet the demand at European markets. This led to the canal based irrigation of the areas now comprising the district of Faisalabad. In 1880, a colonial officer, Captain Poham Young, with the support of Sir James Broadwood Lyall, proposed a new town. The design was based on the Union Jack, with eight roads radiating from a large clock tower in the centre. The eight roads developed into eight separate bazaars. The construction of artificial canals allowed the surrounding areas to be irrigated. The town grew rapidly as farmers settled on newly irrigated land. A large number of settlers came from different areas of Punjab especially from Ludhiana, Jalandhar and Ambala on the promise of large agricultural lands. With the extensively planned distribution of land the canal irrigated areas of Sandal Bar soon became populated. This led to a rapid transformation of the nomadic environment of the Bar into a more agriculture based one.

In 1892 the British Raj decided to join Faisalabad (then Lyallpur) with a rail link to major rail network to transport agricultural surplus to the ports to be shipped to European markets. In 1895 the rail link between Wazirabad and Lyallpur was completed. In 1896, Lyallpur was given the status of a tehsil of the Jhang District, and its administration was carried on in tents on the old Theh (Mound) of Pucca Mari near Tariqabad. The majestic Clock Tower was constructed out of the funds raised by the landowners, who collected it at a rate of Rs. 18 per square of land. The fund thus raised was handed over to the Town Committee, which undertook to complete the project.

By 1902 the population of the town exceeded 4,000, including the new Sialkot Jats, particularly Bajwas, Kalloos, Cheemas and Chattas came to establish the agriculture land of Chenab (called Chena bar). Houses and shops had been constructed to cater to the ordinary needs of the population. In 1903 it was decided to establish an agricultural college. In 1904 the new district of Lyallpur was constituted, composed of the tehsils of Lyallpur, Samundri and Toba Tek Singh, with a subtehsil atJaranwala which later became a full tehsil. By 1906, the district headquarters began to function in Lyallpur and all the bazaars and settlements within the bounds of a ring road were nearing completion. The city began to spread outside the circular road. The Town Committee was upgraded to a Municipal Committee in 1909 and the Deputy Commissioner was appointed as its first chairman. In 1916, the grain market saw its shops surging with customers. In the same year the civil hospital was expanded. With the advent of World War II, there was an increase in political awareness across the city. Revolutionary meetings were held, fiery speeches made, and slogans written on walls.

The first colonisation officer Aurangzeb Khan made sure that no individual in this district owned more than 25 squares 625 acres of land. The merit or method of allotting the land was to check each individual's hand who was applying for some land, and if the hands showed that individual had worked hard in the past, only then was land given to him, which has led to a district where there aren't any big land owners, as the land has been equally distributed amongst hard working men and it is their hard work that has led to Faisalabad becoming the third richest district in Pakistan.

The main roads in and out of the city were kept 1-acre (4,000 m2) wide; since the independence of Pakistan a lot of roads have been taken over by land mafia. Some industrial areas were kept on the East of the main canal which is present-day People's Colony and Madina town. The urban areas were kept to the west of the canal, as sweet ground water flowed from the canal to the river Chenab, the consequence of changing former industrial area into urban areas has been a lack of proper drinkable water for those living in peoples colony and Madina town. Another industrial area was developed at the west end of town, now around the road towards the central Punjab town of Sargodha.

These earlier development of industrial areas led to industrialization of the city of Faisalabad right from its inception. Initial industrial setup were related to cotton and basic textiles, still the most dominant industry of the city with more value added products. Besides textiles food processing, grain crushing and small chemical industry was established in the pre-second World War era.

In 1943, Quaid-e-Azam Mohammad Ali Jinnah came to Lyallpur and addressed a gathering of over 2 million in Dhobi Ghat Grounds.

After the independence of Pakistan in 1947, the minority Hindus and Sikhs migrated to India while the Muslim refugees from India settled in the Faisalabad district. Muslims refugees from East Punjab, Haryana, Jammu started arriving and crossed the border into Pakistan; many were given land in Faisalabad District to settle. After independence, the city of Lyallpur enjoyed considerable development, and became a major commercial and industrial centre. The population grew quickly past one million. There was an expansion of the provision of health and education in the city. In 1977, the name of the city was changed to "Faisalabad", in honour of the late King Faisal of Saudi Arabia, who was held in high regard in Pakistan. In 1985, the district was upgraded to a division with the new districts of Faisalabad, Jhang and Toba Tek Singh. 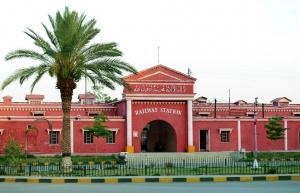 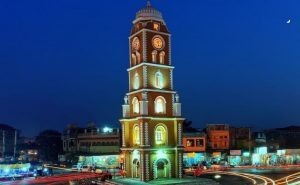